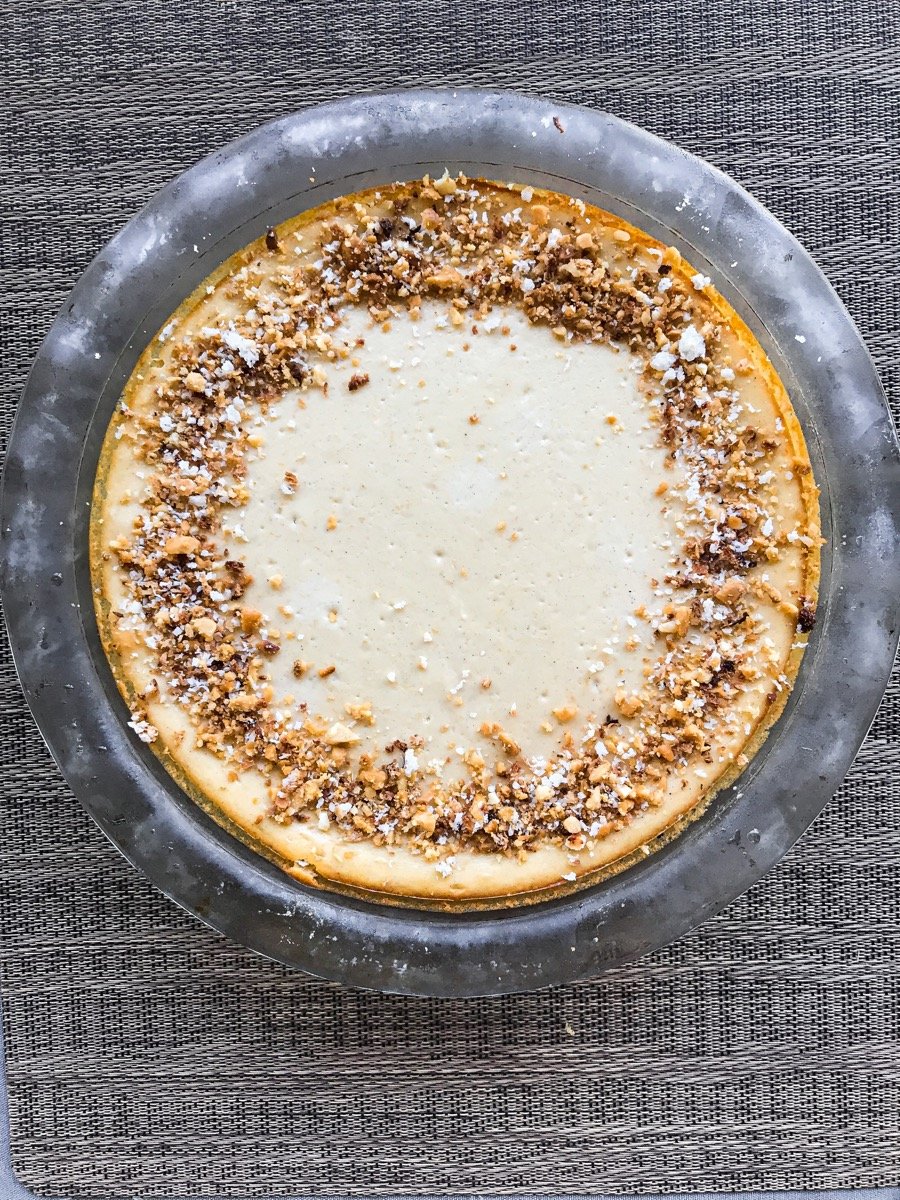 Why is this winter squash cheesecake recipe healthy?

Ok – let’s cut right to the chase. This healthy winter squash cheesecake recipe, is labeled as such on my page because I use a combination of coconut oil and butter in the crust. (I know butter is good for you but it’s hard for me to use 6 tablespoons of it at once in a recipe, plus I have way more coconut oil than butter in my house).

I also use maple syrup instead of refined sugar. Maple syrup is much more rich in essential minerals (calcium, iron, magnesium, potassium, zinc, copper, and manganese) than sugar. And! coincidentally, I have much more maple syrup in my house than sugar (which is pretty much reserved for kombucha making at this point).

Lastly, this winter squash cheesecake recipe uses about 3/4 as much squash as cream cheese, compared to cheesecakes that are close to 100% cheese. Winter squash is an original super food, complete with carotenoids (like your favorite Beta-carotene), protein, Vitamin C & B6, fiber, magnesium and potassium. If I had had access to hippie graham crackers while making it I would have used those instead of Honey Maid – but hey! at least they boast no high fructose corn syrup. Maybe next time I’ll make my own cookies for a crust… (haha we will see).

What if I don’t have a spring form pan?

Perfect! Then this recipe is for you. You can make cheesecake in any pan that has walls that you can safely put in the oven. I have A LOT of kitchen gadgets, but being sorta dairy and gluten sensitive, I still haven’t added in spring form pans (or even cake pans!) to my arsenal here in Hawai’i. But, Black Friday is just around the corner so maybe I’ll re-up my kitchen supplies.

Anyways, this recipe is pretty much cut in half from your traditional cheesecake recipe (you know, the thick slices with 2 inches above the crust that make you wonder why you ate dinner before dessert?) Well, in this recipe the slices are just as wide but they’re not as tall because I use a pie baking dish. I’ll admit I had a little extra filling (about 1/2 cup or so) so I made a little more crust and made an extra mini cheesecake so we could try it before I gave it to my friend for her birthday to share with her family. (Covid-era! and we cannot have her over for dinner, blow candles out!, etc.)

What is tropical winter squash?

The term tropical winter squash is not scientific. Really I mean Curcubita moschata, a species of winter squash that is more tolerant of heat and humidity, and pests than C. maxima or C. pepo Which of course explains why we can pretty much grow it here year round in Hawai’i as long as we give it the ideal circumstances for producing fruit.

The curcubita moschata varieties we like most have orange skin on the outside, are about small – medium and more oblong than round. This one pictured was the only one we’ve harvested from the farm this summer. I got the seeds to plant it from a winter squash we found at the farmers market that had my favorite characteristics mentions about. It is obvious but worth nothing – that this winter squash cheesecake shares a lot of similarities with its cousin pumpkin cheesecake.

Let’s jump to the cheese

Really I made this recipe because no other recipes combined everything I WANTED to use in a cheesecake recipe. So I mulled through many recipes, tried to get an idea of the ratios, portions, and just general vibe – until I sat down to write this one up. So if you enjoy a little bit of the healthy cooking but still want to keep things a bit “traditional” – I hope you find this recipes gives you a baseline for the possibilities out there.

This was actually the first cheesecake I’ve ever made by myself. Recently, I supervised an 11 year old who had a dream of making strawberry cheesecake. We used this recipe from Delish. It came out excellent to her standards – but I did learn a few things about how to be more specific in writing the recipe, how to crush the graham crackers (in a food processor not by hand!), and how much batter would fill the pan appropriately. For this winter squash cheesecale recipe I also based my proportions around the Delish recipe a bit.

If you have a lot of winter squash to use, you may also like my ginger & squash beef stew recipe, my winter squash bisque recipe, coconut, red pepper and squash soup, OR my farm fresh breakfast bars recipe (coming soon!).

This "healthy" recipe is for a small cheesecake (that has about 3/4 of a inch of filling) – I made in a pie pan but cake pans would work too if you're not worries about presentation. I use more coconut oil than butter in the crust, maple syrup instead of sugar, and of course, part of the filling is homegrown tropical winter squash.
No ratings yet
Print Recipe
Prep Time 30 mins
Cook Time 45 mins
Resting time 4 hrs
Total Time 5 hrs 15 mins
Course Dessert
Cuisine American
Servings 6
Calories 395 kcal

For the squash cheesecake filling