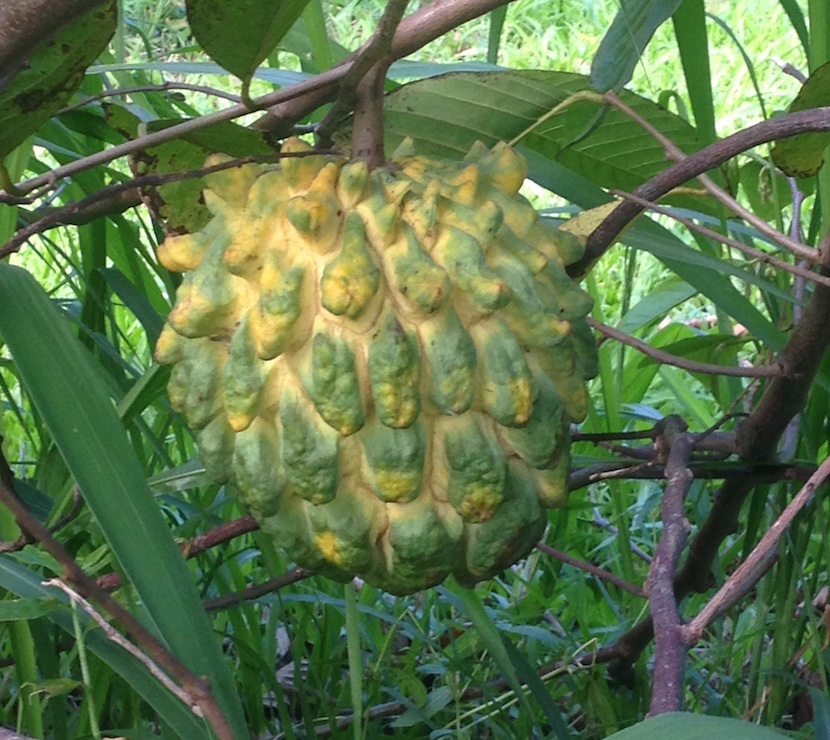 Rollinia could just be your new favorite fruit. For newbies with the  annona fruit family,  this fruit may genuinely surprise you. It’s got soft but spiky nubs and custardy, bright and sweet jelly like flesh. Sometimes it take a few tries to turn fruit skeptics into fans. For others like me, it was love at first sight/taste. Rollinia is SOOOOOO easy to grow in wet Hawaiʻi (and other tropical locations). It fruits from seed in as little as 2-3 years and may fruit multiple times a year for a staggered harvest.

Rollinia Deliciosa or extremely similar Rollinia Mucosa. This fruit is known most commonly in Hawaii as Rollinia and in Brazil as Biriba.  There is a lot of debate among taxonomists about differences in these possible species (deliciosa v mucosa). More recently, taxonomist have chosen to forget their differences (mostly seen in the size and shape of the soft nubs on the outside and slight variations in flavor). They’ve given a new scientific name to them: annona mucosa – but this name has not be universally accepted. So, it seems like for the time being you can research R. deliciosa, R. Mucosa or A. Mucosa and find information on pretty much the same fruit.

Also under debate is whether this delicious fruit is truly in the custard-apple or annona family (annonaceae).  Still, taxonomists consider it a relative to other annonas like the Sugar apple (A. squamosa), cherimoya (A. cherimola), soursop (A. muricata), custard apple (A. reticulata), pond apple (A. glabra), ilama (A. diversifolia).

Rollinia looks like an alien fruit. The flesh is a soft, gooey or jelly-like white pulp.  It has a white core and several dark brown, elliptic or seeds. The inside is creamy and soft, with very few fibers. The fruits vary greatly in size and shape and can weigh up to 8 or so pound.

The taste is a lemony custard- flavor, like lemon meringue. It is eaten fresh but is also made into raw desserts, ice cream, smoothies, etc. In Brazil it is fermented to make wine. Once rollinia is cut the flesh oxidizes quickly, it will also temporarily stain white dishes.

Importantly, research shows that the seeds have insecticidal properties and are poisonous to humans. Do not eat the seeds from rollinia or any other fruit in the Anonaceous (Annona) family. Be extremely careful when separating the flesh from the seeds for pureeing or putting in smoothies.

Generally, rollinia is considered to have a short shelf life. The fruit ripens from green to yellow and can be picked early when they start to turn yellow. Clip the fruit leaving some stem. They still they may take approximately 4-7 days to ripen. You should try to eat it before the soft nubs completely blacken. Once the nubs turn black, the flesh inside turns more translucent and mucosy. Many find it is less desirable at this stage and should be eaten in the next day or two before it starts to ferment.

For picking for market, you can try picking the fruit at the very first sign of yellowing. Also, be careful with storage. The fruits are vulnerable to bruising even under their own weight. Store at room temperature on top of cushioning such as bundled newspaper or bubble wrap. Additionally, you may store rollinia in the refrigerator to extend the shelf life a few more days. But, be aware,  cooling the fruit after harvest can extend the shelf life but the skin is more likely to turn black.

The rollinia fruit is a refrigerant and analeptic (stimulates the central nervous system). Also, due to its vitamin C content (73% RDI per 100g of Vitamin C) it is considered an antiscorbutic (effective against scurvy). The powdered seeds may be remedy for enterocolitis (inflammation of both the small intestine and the colon), but as mentioned above the seeds are also toxic to humans. Still, research is being done on Rollicosin, a new Annonaceous acetogenin, to develop a potential anti-tumor agent. Additionally, in traditional medicine it is used as an anti-pyretic (to reduce fevers), a restorative and general tonic.

Growth Patterns of the Rollinia Tree

The first record of rollinia in Hawaii is from the 1930s. It is thought to have originated along the Amazon in Brazil, although it was also discovered in early Mexico, Peru, and Argentina. It thrives in humid, tropical lowlands.  In Hawaiʻi it thrives in wet, humid locations at 300 feet to 3,000 feet elevations. Also, rollinia prefers heavy soil, full sun and an acid pH.

These trees grow fast, as much as 10 feet a year (up to about 40 feet). They can tolerate of heavy rains, but not drought. In fact, they prefer locations with consistent rainfall throughout the year. They appreciate large mulch rings or organic matter for good fruit set.

In lower elevations in Hawaii, less than 1,000 feet, they may fruit several times a year or throughout the year. At higher elevations they are more likely to fruit in the fall only. Mature trees may put out anywhere from 25-100 fruits a year. But the average range is more like 30-50 fruits per year per mature tree.

In Brazil, scientists found 4 species of beetles that pollinate the fruit flowers. But only about a third of the flowers set fruit. This happens about 55 days after seeing the blooms.

Rollinia is most commonly propagated by seeds because they grow true to type. Seeds may take anywhere from 3 weeks to 2 months to germinate, with about 80% success rate. To speed up the germination process you can try soaking them in water for 12-24 hours, or scarification. Like most fruit tree seeds it is good to sow them in partially shaded and wind protected nursery location.

Grafting and air layering can ensure consistently high yielding varieties. Scale and mealy bugs may be problems, as well as fruit fly.

If you are interested in purchasing rollinia trees, seeds or fruit, please visit my farm website: ainaexotics.com.

I’m also available to set up a tropical fruit display or table at your next party or conference. Contact me for more information.

If you have fallen in love with Rollinia, you may want to check out durian: https://katiestropicalkitchen.com/durian-information-sheet/